Were-Geek Save the Middle of Nowhere

Were-Geeks Save the World Book 3

Into every generation is born a really scary relative. In this case, it’s Walter Chen’s aunt, who puts the spirit of a Chinese chaos god into his body. At first, he doesn’t notice because he’s focused on shooting his indie film in Nowhere, Wisconsin, but pretty soon he’s doing amazing kung fu. Cool!

Bing Zhi Hao was Walter’s lead actor and best friend until he disappeared to become a werewolf and save the world. Now he’s back and trying to make amends…except his shy roommate isn’t quiet anymore. In fact, he’s downright scary. Bing figures out the demigod is taking over Walter—body, mind, and soul.

Soon the man Bing loves will be gone and chaos incarnate will be born on earth. He has to convince Walter to fight off the possession and return to the man he was. But what can he offer a god to convince him to remain a man?

Praise for WERE-GEEKS Save the Middle of Nowhere

“WERE-GEEKS SAVE THE MIDDLE OF NOWHERE is Kathy Lyons back on top form.” — Fresh Fiction Reviews 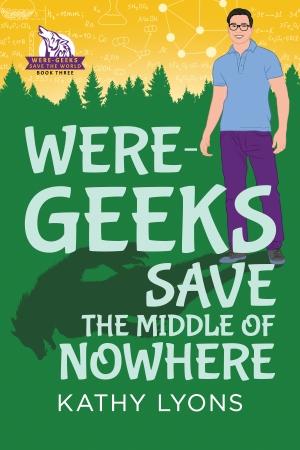